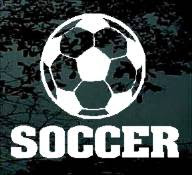 Well, it actually began over a month ago, but I’m a slacker and haven’t posted about it yet. 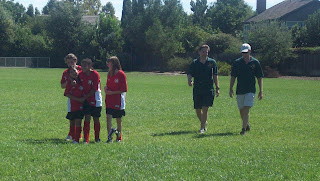 Ari’s 4th game of the season was on Saturday. It was the first away game, it was the third game played in above 100° temperatures and it was a tie. The girls weren’t thrilled…the first three games were wins and I think they really enjoyed the feeling of being undefeated. Of course they are still “undefeated” but it’s not the same when you have a tie on your record. I think the girls are playing really well together and I’m always impressed with how Ari is improving with her soccer skills. She in U12 this year…U12 is the first division where the kids are allowed to do headers…Ari’s done three (more than anyone else on her team)! She always makes sure we were watching too…”did you see that header I did?” As a mom I’m not so sure I’m thrilled with that. I’m glad she’s not afraid of the ball. I’m glad she’s using skills that she’s learning. But, can’t kids get brain damage from doing too many headers? Maybe I need to tell her to lay off the headers for a while, oh say, 5-10 years maybe? 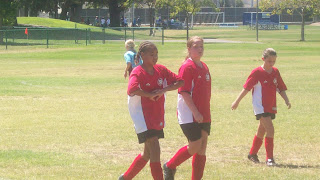 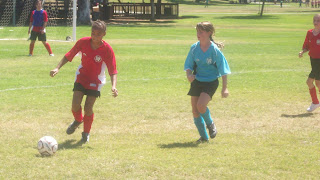 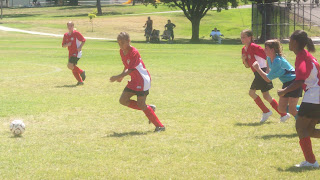 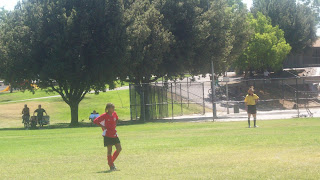 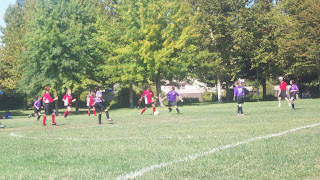 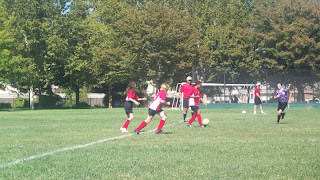 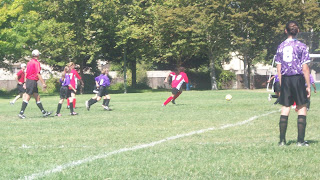 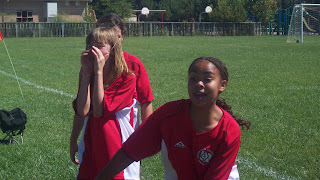 (I think this picture is hilarious, although Ari might not be thrilled ;-)...it just goes to show that even after playing soccer in over 100° heat for over an hour she still has enough energy to run for the snack...ha ha ha!)


I don’t know if this is a good thing or a bad thing, but I’m not the type of mom to get really into the games. I go to every game and I cheer when I’m able to pay attention enough to know what’s going on (I do chase an almost two year old around for half of the games), but I don’t yell at the girls telling them where to be and what to be doing. Actually it was an interesting observation playing this away game. She doesn’t usually play away games and this was a community about 45 minutes away. I noticed that the parents there tended to be more of the yelling type. Their girls also tended to be more of the “aggressive” type (read pushing our team all over the field…Ari was literally lifted up off her feet and landed on her side…her coach told her “way to take one for the team” which just made her smile). We don’t see a whole lot of that in our community and I’m glad. I think it’s nice to let the kids learn the sport without the parents turning into raging idiots. Don’t get me wrong, I don’t think it hurt the girls one bit to be “roughed up” a little. It just shows them what they might come up against, but I’m glad that’s not what it’s all about around here. I’m sure it will be soon enough, but for now they are hopefully learning valuable skills and good sportsmanship.
Posted by Desi at 11:18 AM 2 comments:

I was looking into getting a laptop and saw this: 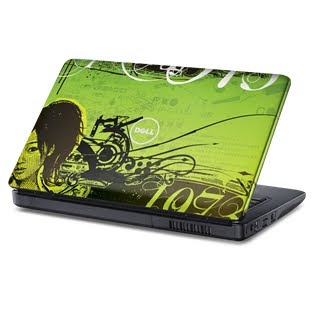 Isn’t it adorable? Ok, I could take or leave the Asian girl on there, but I love the color and the tattooing…but most importantly I love that it says 1973! That’s the year I was born and I’m really weird that way...I have a particular fondness for things that I can tie to myself somehow. Is that weird?

It’s like Thanksgiving…it’s my favorite holiday and I think the reason is because my birthday falls on Thanksgiving every 7 years or something like that. Does that make me narcissistic? I hope not. Am I the only one like this? Would you want a laptop just because it had your year of birth in the design???

I won’t be getting this laptop for more than one reason:

1) I was looking into this before I found out that I’ll be taking a 6% paycut starting next month in the form or furlough days…you gotta love living in California during this wonderful recession!
2) I am NOT a fan of Dell computers because I have one and we got completely screwed over by them
3) And last but certainly not least my husband thinks it’s crazy to spend an extra $85 on the computer just because of the design, even if it does include my birth year…ha ha ha!

I was just playing around with some pictures of Devyn on Picnik and thought I'd share.

The answer, my friend, is blowin' in the wind

All growing up my parents had a reel to reel tape player which my dad swore by for sound quality. Obviously the music that we had to listen to on it was a little dated, but I loved it and it's some of that music that flows through a lot of my childhood memories and are therefore intertwined in the fabric of my life.
One of those albums was a Peter Paul and Mary album and I listened to that thing countless times in my youth. Still to this day I love the songs of Peter Paul and Mary, so much so that when I saw this beautifully illustrated picture book of Puff the Magic Dragon I had to get it for Devyn. It comes with a CD, but I think it’s only Peter that sings on it at a much later date and it’s just not the same as the old recordings by all three of them. Devyn loves her “dragon” book and we were looking at it just yesterday and then I learned that Mary passed away last night of leukemia. So, this post is in honor of her and her amazing voice. These are just a few of my favorites…I hope you enjoy.
PUFF, THE MAGIC DRAGON


BLOWIN' IN THE WIND


WHERE HAVE ALL THE FLOWERS GONE

Where Have All The Flowers Gone (Remastered LP Version) - Peter, Paul and Mary


IF I HAD A HAMMER

If I Had A Hammer - Peter, Paul and Mary

LEAVIN ON A JET PLANE

Leaving On A Jet Plane - Peter, Paul and Mary

There are so many (past) things that I want to update on this blog, but for now I’ll start with last night.

Ever since we’ve moved here we have wanted to go on one of the bat tours given by the local wildlife association, but when we would remember to check out the dates and times (they only do 5 or 6 a year) we would be out of luck. A few months ago I happened to stop by my bosses office when she was attempting to sign up for one of the bat tours and complaining that almost all the ones she tried to get tickets for were sold out. So, I jumped on it and got tickets that night, for the last tour that still had openings. Little did we know three months ago when we signed up for the tour that it would be the same day and time as Ari’s back to school night, so we had to do some finagling to meet her teacher and such at a different time, but it all worked out. Unfortunately for me however her teacher remembered that I had be the class coordinator last year for the end of the year BBQ and asked me to do it again since I would be an old hat at it. See, it’s a 6th grade only BBQ, but Ari was in a 5th-6th combo class last year and when her teacher asked for volunteers I told her I’d help out if she needed me to. She gladly accepted my help, but then as a side note mentioned something about it really would have been nice to have a 6th grade parent do it since it’s a 6th grade BBQ. Ari felt pretty special last year however; because there were only nine 5th grade students in that combo they got to do almost all the stuff the 6th graders got to do, therefore they were invited to the BBQ as well. So, long story short, I get to do it again this year, yippee!

So, back to the bats…

They have a little lecture before hand, which DH and I were dreading knowing how well Devyn was going to sit still for a 45 minute presentation on bats, and we were right…she was a terror! But at the end the kids were allowed to go up and see the bats close up which she loved! All the bats that live around here are Mexican Free Tail bats, and they are tiny, only about four or five inches long and it take three of them to make an ounce. There are two colonies of bats right around us, and by saying right around us I mean one of them(the small one) is a few hundred feet from our front door. I don’t know how many are there, probably a few hundred or so, but Devyn and Ari love to go and look at them and hear them chatter as cars drive under the bridge. The other colony, which we went on the tour to see, has approximately 25,000 bats and lives under the causeway that leads over to Sacramento. They are amazing to watch as they fly out at dusk. It looks like a wave of smoke billowing out from under the causeway. 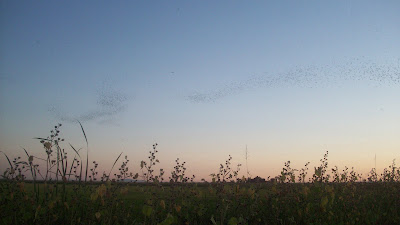 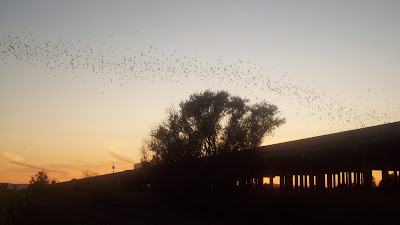 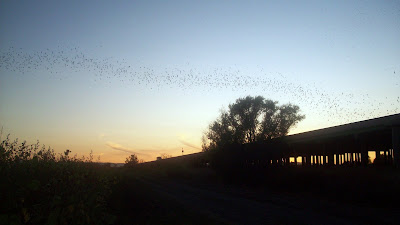 (I didn't get the greatest pictures, but you get the idea)
It also happened to be a full mom last night so when you turned around from watching the bats this is what we saw. 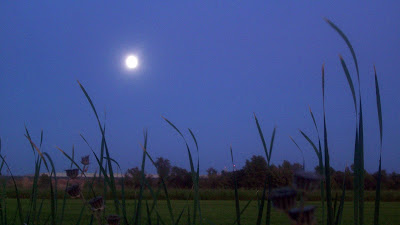 (DH took this shot of the moon, he's a much better photographer than me)

My boss, Kathy, also ended up at the same tour and Devyn immediately fell in love with her daughter Claire who is six. Today Kathy said that Claire asked last night if she thought Devyn would want to be her sister...too cute. 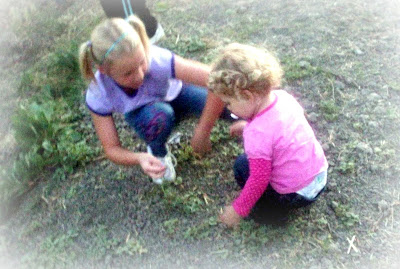 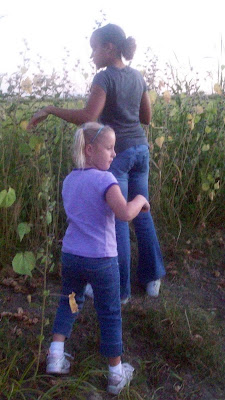 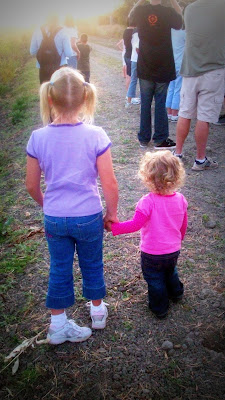 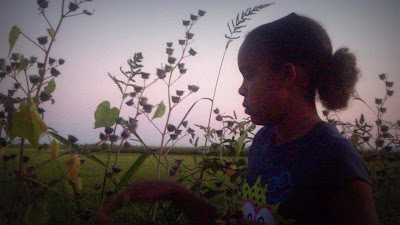 By the way, I am totally addicted to this...I used it on a couple of these pictures. It's a photo editing site and you don't even have to have an account or anything. I would really like to have this photo editing program, but before I get that I'd really like to get this camera, which then I would really need to learn how to use it, so for now I'll just use Picnik!
Posted by Desi at 12:10 PM 3 comments: