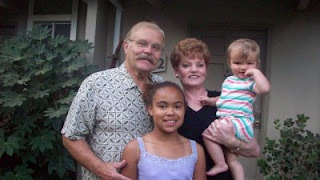 ( I couldn't find a picture of just my mom, so here she is with my Dad and my two girls!)


I just want to post a quick note to say Happy Birthday to my Mom. She is far and away the best Mom anyone could ever ask for. (Just ask Ari, she tells me she wants me to be more like my mom :-)

I love her so much and I'm so grateful for all she did for me and all that she taught me growing up. (Click here to read a little more about her)

Have a wonderful birthday Mom, and know that we are missing you today.

Labels: All about Me, Devyn, family

I know we all have kids that are doing their own school fundraisers, so this post is geared mostly to family, but feel free to participate if you so choose!

If you go to this website and put in Ari's student number, which is R37298D, you can then shop and order. Ari thanks you for taking a look :)

Ari asked me to put this post up on my blog about her school fundraiser. It opened yesterday and it closes on September 22.
Posted by Desi at 11:24 AM No comments:

Someone to watch over me

Are you ever just going along with your day and then realize that you are truly being watched over?

Last night was a pretty typical night for us. We only have one car which can make life extremely difficult at times. I work from 7:30 to 4:30 so DH can then take the car and drive to the next town over for his night classes (pre-requisites for PA school). Taking the bus or riding bikes is not an option because there just isn’t enough time between when I get off work and he has to be at school and somebody has to be home to watch Devyn. So last night Ari had Euro-soccer practice. Every year the soccer league she plays in brings in these guys from Ireland or Scotland to work with the kids on their soccer skills. (Because, you know, Europe and pretty much every other county in the world does soccer better than us). Anyway, we live close to the field where Ari has her normal soccer practices, but the Euro-soccer was a ways away. There just wasn’t enough time to get home from work and bike to her practice in time. Therefore, we dropped Ari off at soccer, I drove DH to the next town over for class, then drove back to pick up Ari, feed Devn, fix dinner and do a few odds and ends before turning around and going back to the next town over to make a trip to Target (because our liberal town doesn’t have one) before picking DH up from class.

Yes, I know this is a long story and it’s about to get longer so bear with me.
So we’re on way home and DH is driving on a couple country roads because it’s a more direct route than the highway. I was reading The Time Thief (The second book in The Gideon Trilogy, which I HIGHLY recommend by the way) so I wasn’t fully aware of what was about to transpire.

*Just a side note, have I mentioned that we love to read as a family? Every time we are going anywhere where we will be in the car for more than 10 minutes at a time we read. I love this habit that we have gotten into and we’ve found some great books that we all enjoy this way. Sorry for the interruption, I just thought I’d share that with you because it’s a great pass time in the car.*

So, we’re driving down a pretty deserted road that has a huge field to our right, and have to slow down to make a left turn onto a road that T-bones into the one we are on. No sooner had we cleared the intersection than I heard tires squealing and then I hear my husband say “Oh Crap! Somebody’s going to be hurt.” I of course had stopped reading at this point and I’m craning my neck to see what DH can see in his rear-view mirror. It’s dark out so all I can see are red taillights way off the road and dust flying everywhere being lit up by the headlights and taillights of that car. We turned around and pull over. DH is a certified EMT, and although he doesn’t actually work as an EMT, he always carries a medical kit in the car for emergencies. He grabs his kits and takes off, while I stayed in the car with the two girls and dialed 911. The car literally went all Dukes of Hazard and flew up in the air before landing a hundred feet away (true story, the police even paced it out), probably rolling twice (according to the police when they got there, because we were, after all, going the opposite direction and it all happened in a matter of seconds.
The two guys in the car are probably late teens early 20s and are beyond drunk and were getting all combative with DH. DH stayed there to flag down the emergency vehicles with his flashlight and talk with them about what had transpired since he got there. DH is on the CERT (Community Emergency Response Team) team here in town and knows some of the firefighters, so he got pretty much the whole scoop of what was going on. To make a very long story a little bit shorter, they blew at 3 times, yes I said that correctly, 3 TIMES the legal limit of alcohol. 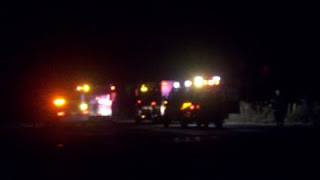 (Our view as we were waiting for what seemed like forever)

After all was said and done and I really stopped to reflect on the situation after sitting there for an hour waiting for the police to take our statement and everything I was pretty upset that the irresponsible actions of a couple of kids could have very easily destroyed my family. As it is, we are all fine and our lives go on like normal, but if we had been literally two seconds later I’m not sure any of us would still be here. According to the police they were traveling at around 85 miles per hour when they hit the ditch on the other side of that road. They flew for over 100 feet and rolled at least twice. Can you imagine what that would have done to us if they had broadsided our car? DH said the driver was very thoughtful and concerned and said he was sorry and just kept saying things like “my mom is going to kill me” and “I’m going to jail, I’m going to jail” and I do feel for him because I know that we all make mistakes, but when his mistake almost destroyed my family my compassion lessens a little. Luckily neither one of them was seriously injured, and they were both taken away in handcuffs. When we got home we thanked our Heavenly Father for watching out for us last night as it could have so easily ended with a different outcome.

I wonder how many times we are being watched over when we don’t see the eminent disaster by way of squealing tires and almost accidents so we have no idea that we were being watched over in the first place. So today I’m grateful for all those times when Heavenly Father has made everything ok and I didn’t even realize it!

Are you picky when it comes to matching?

Remember the shoes at the end of this post?

I loved them so much that I had to get them, but Devyn had nothing to wear them with. So what do you do when you have a pair of shoes and nothing to match? Why you make something of course! This is no small feat for someone who is NOT a seamstress, but I’m picky enough that I had to try.

I found a really cute eyelet lace material that looked good with the shoes and found a pattern that said it was easy and away I went. I had to make it harder than it should have been of course because I wouldn’t be me if I didn’t make everything I did harder is some way or another. By choosing the eyelet I had to line the fabric, and since the edge was just finished with biased tape I couldn’t quite figure out if I should sew the material to the lining first or what. So, I called my mom, who is an amazing seamstress and got some advice before moving on. Then came the biggest challenge of all. I couldn’t find a dusty rose colored biased tape and didn’t like any of the colors I could find. So what did I do? I made my job even harder, that’s what I did. I then attempted to make my own biased tape out of the scraps of dusty rose colored eyelet fabric. I was cursing myself through that process, but in the end I’m glad I went to that extra effort. And I think it turned out pretty cute, for a non-seamstress, if I do say so myself! 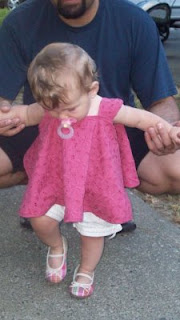