Night of the Living Dead

Ok, not really, but it’s too cute.

Devyn took her first two independent steps on August 5th (you as readers probably don’t really care, but I have to get this down for posterities sake). I was so excited that I called DH in the middle of this class to tell him. They were only two steps and then she fell directly on her little bum, but I’m a mom, I get to be excited about things like this. The next day while I was at work DH tried to get her to recreate it to no avail. Then that night, while he was again at class, she walked three steps and then fell. The next day my parents arrived in town and she just kept walking a few steps at a time, getting up to five or six in a row, but DH was still in class taking his final. I sent him a really crappy video so he could see, which of course he thought was adorable. She finally walked for Daddy later that night after he got home from his class. 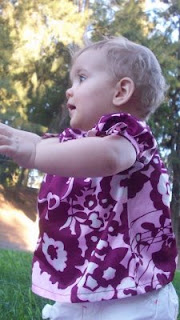 Well, then we went on vacation and she was strapped in car seats and strollers all the time, completely messing with her new found ability to walk, but whenever we got to a place where she could be let out and walk she did. She’s still getting the hang of it so she holds her arms out in front of her, just like a zombie in those really bad horror movies, to keep her balance. It’s too cute. I tried to get a video of it, but I don’t think you get the full effect of night of the living dead, but I'm afraid she's about to become a holy terror!

I have so much to say since I've been gone so long with the vacay and all, but it will have to wait for another time. Be watching for all my wonderful commentary on everything Southern California though:)
Posted by Desi at 10:33 AM

I love how she can bend over and pick up the binkie and keep on going. She is walking early! She is only 10 months isn't she? Rachel is pulling herself up on the funiture but hasn't dared to let go of anything yet. They are getting too big too fast!

So cute! I love her top. Where did you get it?

Wow, two Heathers, I'll have to differentiate :) Now I just need a third Heather to comment and we could make a movie...sorry, stupid I know, but I loved that movie in high school.

Anyway, Heather, Devyn turned nine months on the 3rd, so she starting walking just a couple days later. It is early, but Ari walked at 7 months, so this is a reprieve compared to that.

heather.prn, isn't it darling. We found it at a Target down in Hollywood, but they don't have them at the Target near us so I can't guarantee that all Targets have them.

I love the shirt too! She's so adorable. And I'm SUPER glad to see a post from you again, I've missed you.

Thank you Shauntae, it's nice to be missed.

I've actually been staying away from everything blog, eventhough we are home, because I'm reading Breaking Dawn right now, and I know a lot of people have already read it and I don't want to know anything about it, even by accident, before I finish it.

Also, we don't have internet at home right now because we are too poor, so I can only post at work, which I don't like to do often, so that limits my blog time also.

Why can't I just be independently wealthy so I can stay at home with the kids and blog in my spare time? :) (What spare time with kids, huh?)

so, um, good luck with that. next thing, she'll be chasing ari across the soccer field.

how exciting! She is so adorable desi. You have beautiful daughters.

aww, so sweet... and perfect picture you captured. No stopping her now.

So darling. I'm just sorry you live so far away and I can't see any of these moments up close! Thanks for posting the video-it's the next best thing.

There is nothing cuter than babie's first steps! She is a doll.