I have to admit, I’m a costume snob!

There I said it! No one likes to admit their flaws, and being a snob about anything would certainly be considered a flaw, but if the shoe fits.

All growing up my mom made my sisters and my costumes. She is an excellent seamstress and can make anything her heart desires. Me? Not so much! In recent years I’ve tried to fumble my way through a project or two and it’s only because my Mom tried to teach me about sewing when I was younger, to no avail, but I think a few things stuck so I’m able to muddle through.
Anyway, luckily for me my Mom only has two grandchildren, so she is willing and able to make costumes for us. She has made all but three of Ari’s costumes, and one of those three, she actually did make a lot of and I just helped. Only two of her eleven costumes have been purchased.

Purchased costumes are just not the same!

Every year Ari has gotten rave reviews from everyone we see about her costumes and this year for both of my girls was no different. Devyn wore the costume that my mom and I made for Ari when she was one and looked just as adorable.

Please refer to the following pictures to illustrate where my snobbery comes from:

Please note that in my opinion the costume includes the overall effect including hair and make-up. You certainly wouldn't go to an event that required an evening gown and then throw your hair in a greasy poney tail and not do something with your face now would you? he he he 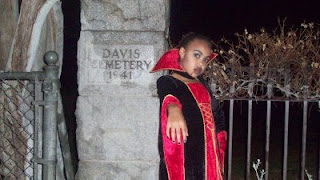 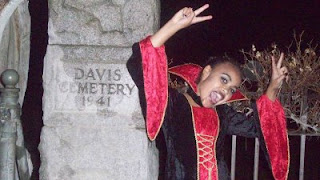 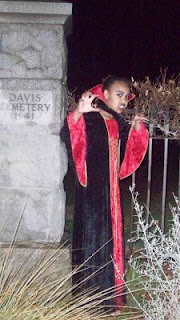 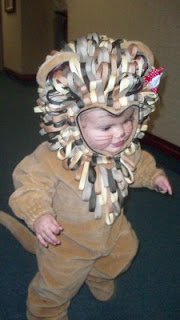 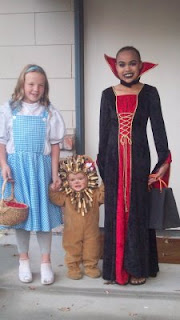 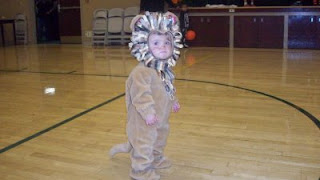 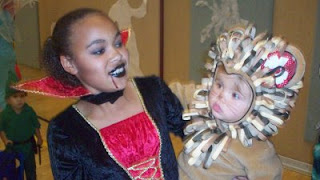 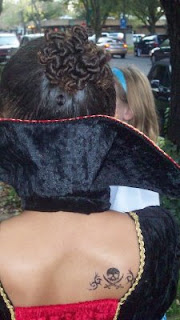 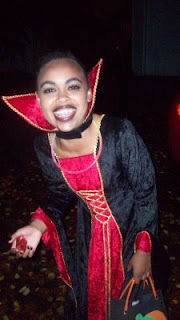 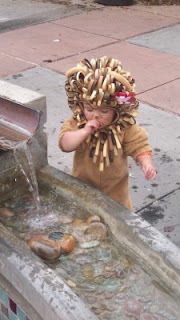 Oh, and please don't hate me because of my costume snobbery...I really do think your kids are cute all dressed up and having fun. And I'm really only elitist about this one thing, I promise!

DH has also told Ari that she is NEVER allowed to wear make-up because of how grownup she looks when she does (even if it does include black lipstick)!
Posted by Desi at 1:29 PM

Both of your girls really did look great. You've earned your snobbery. We like to make our own costumes too, but we've never done anything quite so elaborate.

Ari does look quite grown up-and beautiful! She looks so different every time I see her...sigh! And Devyn could not be a cuter little lion. You are so lucky to have such a talented mom!

Yeah, no makeup for Ari. Ever. She is what Jeff would call trouble. :)

You have good reason to be snobby about that; your mom is amazing! They look fabulous!

What awesome costumes...I say it's not snobby to be awesome!

Hi Desi,
I feel so bad. You won the Bella Sara cards during the bloggy giveaway and I had everything packaged and ready to go and then somehow it ended up at the bottom of the pile on my desk and I re-discovered it last night. I actually mailed it off this afternoon so you should get it in a day or two. :)

I can't believe how much BOTH of your girls have grown up!! Where does the time go? Are you coming to IF for the Holidays. I would love to see you.

Unfortunately it doesn't look like we will be coming home for the Holidays this year. I would love to see you and will be sure to see if you are around the next time we make it back in town. I hope all is well.

They looked fabulous! I really admire costume snobs, but I am definitely not one of them. A lack of creativity on my part, I think.

I've enjoyed looking at your blog.

On a really random note, today I looked at you in Relief Society and thought "Desi has the most beautiful skin ever!" How do you keep your skin looking so perfect?

Oh Corri, thank you. I feel like my skin and everything else just keeps looking older and older so that is very sweet of you to say.