Have you seen this Sesame Street video (click on the above link to watch)? Oh how I wish this had been around when Ari was younger. I can't even count the number of times that Ari would tell me she wanted long, straight blond hair "like you mom." It would break my heart every time. I always tried to keep it healthy and do any number of cute things with her hair so that she would feel good in the hair that God gave her. Like it or not hair is a big part of most women's identity and self esteem and I wanted to give her a reason to be proud of her hair. She would have people all the time comment on how cute her hair was and just want to touch it and feel how soft it was. After years of this she would get so sick of random strangers asking to feel her hair, but I always had hopes that this attention would help her understand how beautiful her hair really is, but I'm not sure that it really made any difference. She's wanted to chemically straighten it for as long as I can remember and I have refused to let her. Being that she is biracial her hair is pretty unique. It is very soft but very curly. Her hair is thinner and finer than mine, but because of all the curl it looks big and frizzy if you don't do anything to it. It also does not grow! I mean of course it grows, but I can count on two hands the number of times she's had her hair trimmed in her entire life and yet it is still no longer than a few inches below her shoulders when it's soaking wet. This is not uncommon for black hair, but it doesn't change the fact that she has watched me cut all my hair off to donate to locks of love on two separate occasions and both times it's grown back longer than hers within a year’s time. Because her hair is unique and a combination of black and white hair I'm afraid that if I let her get her hair chemically straightened it will be too harsh on her hair and then it will all break off and because her hair grows so slowly she will have virtually no hair. I have toyed with the idea of letting her but knowing how unique her hair is I just don't know who to go to that will understand its complexities and not destroy her hair. When I got my first perm (way back in the 80s) I had waist length hair and the lady processed it too long and I had a bunch of my hair break off. I was 10 years old I think and wore my hair in pony tails quite often and would have little tufts of hair that stuck out for months that were trying to grow back from that little episode. Ari’s hair would literally take years to grow back if that happened.

We've had her hair braided a few times which she likes because it gives her the long hair that she doesn’t have to do much with everyday, but 1) it's ridiculously expensive ($100 and it lasts approx. 3 weeks) and 2) I’ve heard that it’s actually not that great for your hair because it puts too much strain on the hair follicle.

I love that this sesame street video encourages girls to love their hair just the way it is…but it’s a little late for Ari. She has already formed her opinion, along with the media’s help unfortunately on what is deemed attractive. I want Ari to see the Chris Rock movie Good Hair, but knowing how Chris Rock can be I’m afraid it might be a little crude for her so I need to watch it first and just haven’t gotten around to it yet.

If anyone has any great suggestions on both loving the hair that she has and any good stylists or products/procedures that would give her more manageable hair but won’t destroy it in the process I’m all ears.

(These are just some random pictures of Ari's hair. I used to do all kinds of "cute" things with it, but she is now in that awkward age where all girls are doing their own hair and think it looks really good. Yeah, I went through that phase and wonder why no one told me how bad my hair looked...ha ha ha. But really she usually just pulls it back in a pony tail so it's not so unruly.) 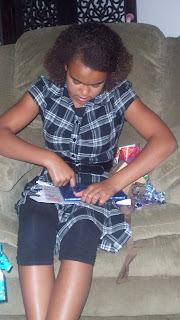 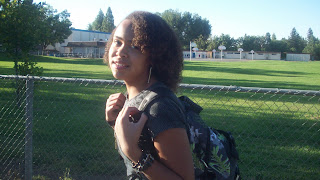 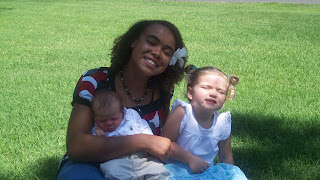 (I absolulety love these tight ringlets that it curls into when just the right amount of product is used...) 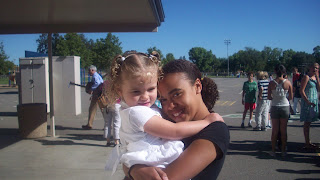 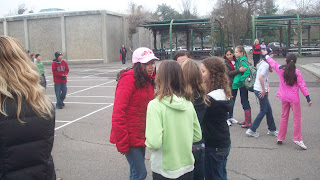 Very nice blog. Know first hand the challenges you have had (and sometimes I had when she was in my care)with Ari's hair and what cute styles you always put her hair in. Also know first hand that time when the daughter(s) want to do their own hair and that sometimes it can be nail-bitting time for the mom. Ari is such a pretty young lady and oh, how we love her - challenging hair and all.

Desi - consider blow drying it with a round brush and straightening it with a straightener. We did that to our girls hair and they have kept it up since. None of them have perms. Also get a good grease and make sure she is not washing it everyday. Anything I can do to help...let me know.

We have tried blowing it out with a round brush and then using a straightener, and I probably just don't know what I'm doing but it never works very well. It is smooth for about an hour before it starts to frizz up again. I think a lot of it is that it is so fine that it just "flys away." She only washes her hair 2-3 times a week as well and grease is too heavy for her hair, it just weighs it down and it looks really oily. She uses a ton of different products including spray-on leave-in conditioner, hair lotions and gels for curly hair...ugh!

That is amazing that non of your girls have perms, I guess we'll just have to keep trying. I wish I lived closer to you and I'd have you show me what you do :-)

I;ve never seen it but I heard some of the girls I worked with this summayer talking about good heair and it sounded like they though it was pretty good so maybe you should watch it first and if it's not too adult watch it with Ari. P.S I love her hair just the way it is and she's beautiful.