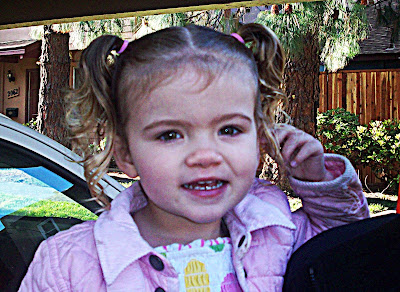 Devyn is growing up so fast and I find myself already forgetting some of the cute things that she says and does so I want to get some of them documented before I forget anymore.

Reason why: Like any toddler she loves to question why things are the way they are, but she never just asks why, it's always "reason why?" It is often combined with a whole phrase as well, i.e. “Reason why going there?”

Which where: This one is baffling...we have no idea why she started saying this but it just means "where?" If she wants to ask where we are going or where something is it's always "which where?"

Yesiree: She will say yes sometimes, but usually its yesiree.

Licious: Always said very emphatically, and with a strong emphasis on the Lish sound. This means delicious (and she has actually just recently started saying delicious more), but is often said when she really wants something, i.e. if she finds a lollipop, she will bring it in and show you and say “licious” repeatedly as a way of saying, I really like lollipops and I really want this one, can I have it. She will also do the same thing with the word “yummy” as well.

Me’s: This is another baffling one as she used to say “mine” but now it’s transformed to me’s, like when she’s asking if something is her she looks at you questioningly and say “Me’s?”

Nay Nay: This one has actually gone away, but for probably almost a year this was her word for “thank you.” We have no idea where it came from and we could get her to say thank and you separately, but not together. When she was being appreciative and wanted to say thank you it always reverted back to "nay nay," but this has changed in the last couple of months. 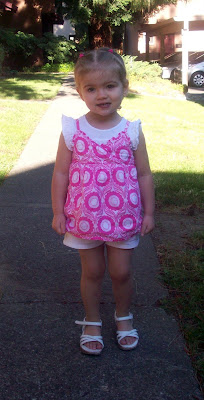 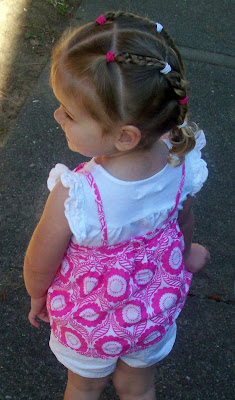 (Just a close up of her hair for fun!)

Devyn is really into the alphabet right now. She refuses to slow down when singing the song though so she flies past “i” through “p” and it’s hard to tell what she’s saying, but then slows down again. Her favorite part is “w,x,y & z”. She will say that part just randomly all day long. She also loves to look for letters on building and gets all excited shouting “abc’s” while pointing and has us read and spell out to her what it says. She is getting really good at being able to tell us the letters now though. She also is doing really well with counting but specifically chooses to skip the number 3. She didn’t used to do this, so yet again, baffling. She is just one very headstrong child and won’t be told what to say and when.
She loves all creatures great and small, especially small. I’ve talked about her love of spiders before, but she is also obsessed with snails. She goes out snail hunting every time it rains.
Even though she loves the creepy crawlies she is very much a girly girl. She love to twirl when she gets a dress or skirt on the will twirl. About a month ago I put a new skirt on her and she started twirling around the living room saying “me a princess, me a princess” and then got a look of dejection on her face and using hand motions (of putting a crown on her head) she said “no, crown.” It was too cute so we went and cut out some paper and made her a crown right away…She decorated it will all kinds of beads and shiny things and she now loves to put it on and say “me a princess.” What’s funny about this is she has never even seem any of the princess movies or anything. I don’t know where she came up with this princess stuff, but I think it must be born into her. Ari has never really wanted anything to do with princesses so who knows. (Unfortunately I don't think I've taken any pictures of her in her crown.) 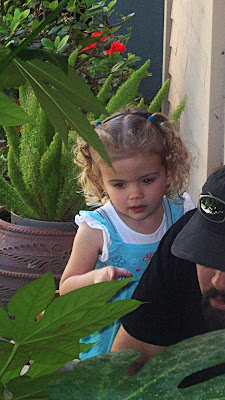 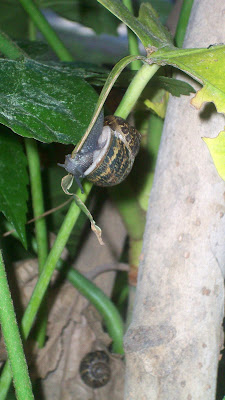 (This is what she's looking at in the above picture)

Well, this is really all I can think of for now, but hopefully I’ll be posting more about both Ari and Devyn as they are both growing up so fast.
Posted by Desi at 11:43 AM

Devyn just gets cutier every time you post a picture of her. Thank you for sharing the fun things she is saying - we so miss being closer to you to see these changes. (The few minutes she will talk on the phone to us we don't get to hear these things.) Can hardly wait to come to be with all of you and get to see our new grandchild in less than two months.

She has the most beautiful toddler hair!

Oh my goodness she is getting so big and couldn't be cuter! Love seeing new pics of her. Thanks for posting!

Hi,
I have a blog that shares Birth Mother stories and I was wondering if you would like to be a guest on my blog ? I would love to learn more about you and share your story if you would like to do that.
Here is the blog site...
http://openadoptionmatters.blogspot.com/
you can email me from there :) Hope to hear from you! :) Thank you for being you!!!!