I had the opportunity to be summoned for jury duty this past Monday. 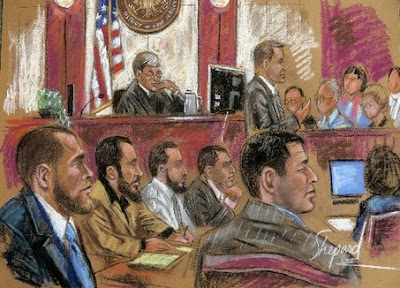 Some people might think I’m crazy, but I’ve always wanted to serve on a jury, but I have never been summoned before…well, I guess that isn’t quite true. I was summoned once while in college and I forgot to call in when I was supposed to…which if you know me it’s not like me to forget something like that…not to mention I’m pretty much a follow the letter of the law kind of girl so I was terrified I was going to be arrested or whatever happens to you when you don’t report for jury service. I called as soon as I remembered and the lady gave me a big long lecture about how I could be held in contempt of court and all types of fun things like that, but in the end told me it wouldn’t be a big deal…this one time.

So anyway, never having gone in for jury duty (nor ever having been tried for anything) I didn’t know what to expect. I’d never been through the Voir Dire process so it was all new to me. I have to say that I felt bad for the defendant who had to stand up in front of all 65 or so of us as potential jurors and have the crimes against him read, but that’s really beside the point. There were literally around 65 of us from which they would choose 13 or 14 jurors. They called up a group of 18 of us from randomly generated names (I was not in the initial group of 18) who were then instructed to sit in the jury box and handed a list of questions. A microphone was passed down the line as people rattled of the answers. The questions were:

• State your full name
• State your occupation and employer
• List everyone who lives at your residence who is over the age of 18 stating their full name and occupation.
• Do you have any children and if so how many and state their names and occupations if over the age of 18?
• Have you ever served on a jury before and if so was it a civil or criminal trial and without telling us the outcome, did the jury come up with a verdict?

After everyone in the jury box answered these questions then the attorneys were allowed to ask general questions to all of the jurors or to specific jurors if they had more questions. Then the attorneys in rotating order got to eliminate jurors one at a time, for no particular reason. The first round they eliminated probably 7 or 8 people and then those seats were filled with new potential jurors and the process started all over again with them. I actually found the whole thing quite interesting, probably because it wasn’t me that was about to be on trial. I get that they are doing this to try and come up with a jury that is most sympathetic to their respective sides cause, but I would really have liked to know what was going on in the attorneys heads as they were asking questions and sending people home at random. This whole process got me thinking. I was in the fourth group called up and once we had all gone through the spiel and answered any questions asked I was the first one to be eliminated from my group. It was the defense attorney that said “Your honor I would like to thank and excuse juror #2, Miss …” So obviously the defense didn’t think I would be sympathetic to his cause. But it got me thinking about the way we judge others and what type of a first impression I make that made him think that. I was not asked any specific questions by either of the attorneys. When stating my occupation and that I worked in the Development Office at the University the judged joked with me about being the ones that bring in all the money. Could my job have been the reason? I was the only one out of probably 70 people who was wearing a dress…did that have anything to do with it? Did the fact that I am white or seemingly educated (based on my job) make a difference to him? Was he afraid that I was racist or intolerant of those who are different than me (the defendant was Greek I believe, his last name was Krystos and he looked as though he could have been)? When talking to a co-worker she said that if that attorney had seen me either with my husband or my daughter the outcome might have been different and I might be serving on that jury right now. Maybe, maybe not...I'm sure that either way it doesn't really make much of a difference.

(Oh, and by the way, even though I’ve always wanted to serve on a jury, I am crazy busy at work so it’s really a good thing I didn’t get chosen.)
Posted by Desi at 3:42 PM

hmm. i don't think i've ever actually seen you. you don't put pictures of yourself up. we obviously ran in the same circles once upon a university... but my only impression of you is that you are a caring mom, a loving wife, and a hard worker.

not bad for never having met face to face!

I have always wondered about that as well. Jeff served on a jury a few years ago. He said it was cool.
I have been summoned three times and each time I have had a brand new baby or a store that I couldn't just leave. I'm sure it will happen sometime.

You should move to Houston. People there get summoned for jury duty regularly. I was on a jury for a DUI and while the whole court experience was fascinating and educational, I actually hated passing judgement on someone else.

ugh, I used to DREAM of being on a jury - I was always SOOOO excited about it. I was a registered voter for seven years before I was ever even summoned. Then I got put on a horrific case involving the death on an infant.

Yeah, I don't think jury duty is so fun anymore :(

(Though even though the crime was horrific, the process was still fascinating)