What dreams are made of!

I think you probably have to be living under a rock to not have either seen or heard about this woman but just in case I’m posting it here. 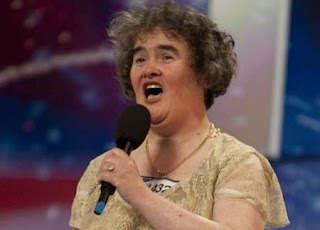 Susan Boyle appeared on “Britain’s Got Talent” recently and when she walked on the stage you could see the incredulity on the judges faces (one of whom is Simon Cowell, who also unless you’ve been living under a rock you know as the pretty nasty judge on American Idol) along with smirks and laughter from the audience, all seeming to be judging this woman by her age and appearance that she most certainly could not posses much talent at all. As I’ve said before it infuriates me that we as a society judge people based on their looks or what we perceive of that…which is what makes this even that much more poignant.

When she walked on stage and Simon asks her how old she is and she replies with 47 he actually rolls his eye and basically implies that if she actually had talent that she would have done something with it at this point in her life, and then she begins to sing. I actually got chills as I saw the look of doubt on the judges’ faces turn to disbelief to pure awe that this amazing voice belonged to this woman who didn’t look the part. I felt so much pride and joy for her as the audience who snickered as she stepped on stage rose to their feet to give her a standing ovation because she was actually that good!

And, could you have picked a more perfect song? Anyone who knows me knows that Les Mis is my favorite Broadway show (more recently followed closely by Wicked) and “I Dreamed a Dream” is one of my favorite songs… how amazing that the last words she sang were:

I had a dream my life would be
So different from this hell I'm living
So different now from what it seemed
Now life has killed the dream I dreamed
She is not letting life kill her dreams and how truly beautiful that she was able to prove so many people wrong when they judged her on her appearance alone and she was able to show every single one of them wrong they really were just by doing what she knew inside she could do.
I hope that we all can be more like Susan Boyle and not let others disbelief keep us from doing what we know we can do. What an inspiration she is…she truly deserves all the praise she is getting.
There have been so many requests that embedding has been turned off on this video, but click on this link and it will take you to the YouTube page and you can view it there!
http://www.youtube.com/watch?v=9lp0IWv8QZY

I literally get chills every time I watch her…truly remarkable!

I am totally bawling. What an amazing thing to watch.

In a small way, it reminds me of my husband. People are always surprised at the sound that comes out of him. He's so skinny and yet has such a powerful voice.

Throughout today I have been reading the various national on-line news agencies as they have reported about this woman but only heard a short snippet of the song. Thank you for forwarding the whole song. She does have an incredible voice and should humble all of us regarding being judgmental. Go Susan Boyle and may this first step take her further to her dreams.

once again, you are on the money. i thought all the same things you did when i watched this the other day.
and i've seen les mis four times. love it so much, i had it on the VCR while i gave birth to mika. i know, right? ridiculous.

i would say "let's swap itunes libraries" but i'm guessing it would pretty much be one big duplication.

Her story (and voice) are truly inspirational!

Thanks for sharing this. I guess I really do live under a rock because I had no idea about this lady and her amazing story! Even my cold little heart was touched-I needed a little bit of goodness today!